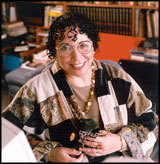 Virginia Hamilton
her influence, her words, her love
by Jaime Adoff

One of my earliest memories was curling up underneath my Mom and listening to her read one of her books to me. My favorite, “Time ago tales of Jahdu.” I swear for years, I really thought she was Mama Luka. Whenever she read that book to me I became Jahdu, I was transported right into the book, into the story. My mother’s voice guiding me through. That is the power of words, the power of a masterfully written story, told by a master storyteller—told by my Mom.

I think her greatness as a writer was only eclipsed by her greatness as a mother. Raising both me and my sister Leigh to be truly free thinkers. Fostering our creativity at every turn. Our house buzzed twenty four hours a day with imagination. Mom and Dad going into their study’s to work in the morning, my sister and I playing in our fantasy worlds, around the house.
Then at dinner, Mom and Dad would talk about the days writing, how each of their projects were going. Leigh and I would talk about our day too. What we learned, what games we played, the meal always ending with lots of laughter.
I think of all that creativity, swirling between Father and Mother, Brother and Sister.
And the magic, to me, it was all magic...

Seeing my Mother go into her study with nothing but a cup of coffee. Coming out hours later with pages of writing. This amazed me. Every day she did it. Sometimes I would watch her work, listen to her read her manuscripts to my Dad, watch them discussing ideas, characters, plot.
All of this I soaked up into my imagination, it became part of my upbringing, part of who I was, what I would become. Of course as a child I didn’t know the significance of watching the creative process up close, to me it was just cool to be there—to be watching my parents do their job, together, this job that to me was as mysterious as any mystery novel.

As I got a little older my Mom would make a point of telling me that her job was just like any other. She just worked at home, her tools her typewriter, paper and White Out.( Do they even make white out anymore?) She always instilled in me an incredible work ethic—making sure I really understood that to be a creative artist was work. You just didn’t sit down and write a perfect novel, or a perfect song. It took time, and work and years of dedication to learn your craft. A lesson that was never lost on me.

My path was music and I approached it with the dedication and passion I had seen in my parents, as a child. Receiving a Bachelors of Music degree from Central State University in Ohio, where I studied Drums and percussion. Then going on to study voice in graduate school at the Manhattan School of Music in New York City. My mother was so supportive during this time, watching me perform with my Top 40 cover band at Holiday Inn’s across southern Ohio.
Coming to all of my recitals in college.
When I fronted my own Rock band for eight years in New York, she would come see me perform whenever she was in town. Going to some clubs that my Dad likes to say, “you didn’t even want to put your coat down they were so slimy.” But she was there.

When I called her a few years ago to say I was joining the family business, she took an uncharacteristically long pause, and said, “What’s the family business?” I had shocked my Mom. For those of you who knew her, this was not an easy feat. After a few minutes, she realized I wanted to write books, and this is what I meant. She was overjoyed. From that moment on, our relationship went to another level.

Over the next few years we would talk for hours about writing, our favorite authors, how they wrote their books. My mother knew it all. I would ask a question about writing and she could answer it ten different ways. Some of her writing wisdom I have saved, in the form of emails she wrote me. Some of what she shared with me, I am not even ready to grasp yet, but she told me anyway. I suppose I have the rest of my life to try to begin to understand the genius that was Virginia Hamilton.

How she did what she did, will probably remain a mystery. She told me on many occasions
she didn’t know. Ideas would just come to her, characters, plot. I would often ask her if she always knew what was going to happen next in the book she was writing.
“Sometimes.”she would say, “Sometimes I don’t have any idea what’s going to happen. I just write and see where it takes me.” That would always make me feel good, since as a new writer I rarely knew what was going to happen next. If that’s how the Mighty Hamilton (as my father called her) works, then its good enough for me!

My Mom’s greatest gift I believe, was her love, her unconditional love for her children her husband, her family. I think of all the books she wrote, the thousands of miles she traveled, the many accolades and awards she received. The public person that she was.
Through it all she was always Mom, always the one who was there for me when I needed her. Always the one who would make everything O.K. Always the one who knew just what to say, just at the right time. She did it all, had it all, and never sacrificed a thing. She always put family first, her children always came first, no matter what was going on in her professional life.
This, I will always be thankful for.

Although my Mom is no longer with us, you can still hear her voice. Just pick up any one of her books and open it to page one. Read her words, and its her voice you will hear reading them back to you.
Shut your eyes really tight, and you can see her sitting there, her beautiful smile lighting up the room.

Her words full of magic,
Her life full of love.

She will live forever in our hearts...

For mom,
who loved frogs!!

Books give you brains!
Read a book today!

Clip art licensed from the Clip Art Gallery on DiscoverySchool.com.