Very Coooool interview with me on public radio by nationally renowned journalist Vick Mickunas about THE DEATH OF JAYSON PORTER-CHECK IT OUT HERE! 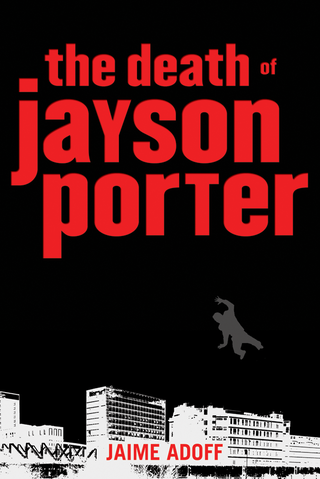 Living in the inland -Florida projects with his abusive mother, he tries unsuccessfully to fit in at his predominately white school, and struggles to maintain even a thread of a relationship with his drug-addicted father. As the pressure mounts, there’s only one thing that Jayson feels he has control over––the choice of whether to live or die.
In this powerful, gripping novel, Coretta Scott King Award––winning author Jaime Adoff explores the gritty reality of a teenager’s life, finding hope even in the bleakest of hours.

*[star]* Jayson Porter’s life is miserable. His relationship with his alcoholic mother wavers between abuse and neglect, his father is a downwardly spiraling crack addict, and he literally has to dodge bullets in the projects just to stay alive long enough to escape in the only way he sees possible. He daydreams about throwing himself off his building, and when he finally does, he has a split-second realization on the way to oblivion that no matter how grim, life is too precious to abandon hope. Miraculously, he is given a second chance at life. Adoff, whose verse-novel Jimi & Me won a 2006 Coretta Scott King Award, captures the inner-city voice of drug-strangled poverty from Jayson’s point of view, in stark prose that crumbles into haunting blank verse, effectively using both white and black space to convey Jayson’s anguished mentality as he crawls ever closer to the edge.. This forceful story will appeal to the many readers, some in despair, who will find Jayson a character they can cling to. It's a hard book to read, and even harder to put down. — Ian Chipman-BOOKLIST-STARRED REVIEW